The conference will take place in the Science Park Albert Einstein. The Science Park is located on the Telegrafenberg in Potsdam. It is home to astrophysical, astronomical, meteorological and geophysical observatories of the instituts AIP, AWI, DWD, GFZ, and PIK, which are integrated into an English country garden, which was already designed in the 19th century. 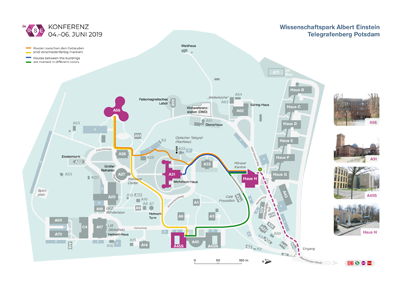 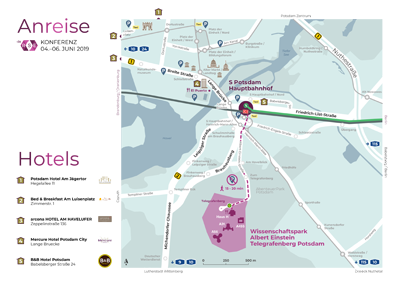 from Potsdam Hauptbahnhof to Telegrafenberg

On the grounds of the Science Park can not be parked. Please use the parking facilities in Potsdam city center, e.g. the parking garage at the main station.

We offer together with the DB an event ticket. Booking is via: https://bahn.events.ccc.de/

The ticket includes a city ticket (validity Berlin-AB). For the event ticket to be valid, you must carry a printed deRSE19 ticket!

A single ticket Berlin-ABC (regular rate) costs € 3.40 and is valid for 2 hours in Berlin as well as in Potsdam. All public transport is available (regional train, subway, S-Bahn, bus, tram, ferry F1). If you only need a ticket for the route from Potsdam Central Station to Telegrafenberg, you can buy a short-distance ticket from Potsdam ABC (regular fare) for € 1.50, which is valid for 4 stops.

The tickets can be purchased in customer centers, at the drivers, at vending machines in the train stations, underground and S-Bahn stations or by mobile phone app. Tickets without printed validity must be canceled before the start of the journey. The cancellers are located near the stops or on the platforms and in most trams and buses.

For the navigation in the suburban traffic Berlin - Potsdam - Brandenburg we recommend the VBB app of the transport association Berlin-Brandenburg: VBB-App or the Deutsche Bahn DB-Navigator app: DB-Navigator App

via A13 from the southeast:

via A24 from northwest

via A2 from the west:

via A9 from the southwest:

Potsdam does not have its own airport. But since Potsdam is located near Berlin, you can fly to Berlin-Tegel or Berlin-Schönefeld. Here is a guide on how to get to Potsdam from these airports.

Alternatively, the bus line 109 can already be left at the Charlottenburg train station, from there take the S-Bahn S7 towards Potsdam Hbf. Total travel time about 55 minutes.

Alternatively, there are the following hourly connections with 60 - 70 minutes drive:

Potsdam has no ICE stop, but is close to Berlin. It makes sense to choose a connection to Berlin Hauptbahnhof and from there to use the trains of public transport to Potsdam.

From Berlin Hbf to Potsdam Hbf

After arriving in Berlin, change to the upper level of the station. From here the regional express RE1 direction Magdeburg or Brandenburg can be taken from the track 13 or 14 to Potsdam main station, which runs every 30 minutes and needs about 25 minutes to Potsdam.

It is also possible to use the S-Bahn S7 towards Potsdam Hbf from platform 16, which runs every 10 minutes and takes about 35 minutes to get there.

From Potsdam Hbf to Telegrafenberg

There are taxi ranks in the immediate vicinity of both exits of Potsdam Central Station. The taxi center in Potsdam can be reached around the clock at +49 (0) 331 29 29 29.

At the beginning of the work or the end of work, a minibus (691) with a final stop on the campus in front of Haus H. from Steig 7 in front of the station.

Please note: from 9:42 to 14:52 there are no buses on the route. In addition, between 08:33 clock and 9:33 clock in the morning to expect full use of buses. Who can, should therefore choose an alternative.